DALLAS, Feb. 6, 2017 /PRNewswire/ — After pounds and pounds of cheese, millions of pepperonis and enough tomato sauce to fill several pools, Pie Five Pizza Co. is opening its 100th location! That’s right – Pie Five Pizza Co. is heating things up in Independence, MO with the grand opening of their 100th location at 18921 E Valley View Parkway on Friday, February 10. In celebration of this milestone, Pie Five locations nationwide will be surprising the 100th customer of the day with a $20 Pie Five Gift card! 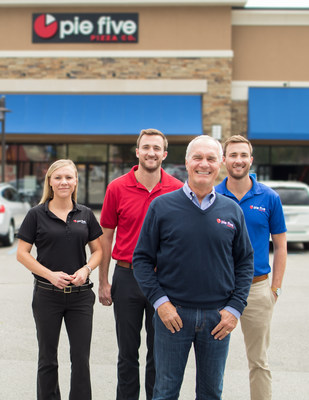 "I can’t think of a better way to kick off 2017 than with our 100th restaurant opening," said Scott Crane, CEO of Rave Restaurant Group, parent of Pie Five Pizza Co. "After 5 years and 100 locations, we are not slowing down.  There is still so much enthusiasm and momentum behind this brand.  I’m looking forward to the next 100."

Additionally, participating Missouri locations in partnership with Sports Radio 810 WHB will host the "810 Special" where all bundles will be $8.10 on opening day at all Kansas City and surrounding area locations. Select Missouri locations will also offer a BOGO promotion from Friday, February 10 to Sunday, February 12, for guests to use during their next visit.

"We recognized there was a large community of people on the Missouri side that couldn’t wait to get their hands on some Pie Five Pizza," said Dave Goebel, Pie Five Franchisee who was recently named one of the nation’s top franchisees by Multi-Unit Franchisee Magazine. "Independence provided the prefect pizza hub. Just like our pizzas – we wanted to be convenient and fast!"

Opening its doors just before Valentine’s Day, Pie Five’s newest location is open every day from 11 a.m. – 10 p.m. and is the sweetest place to bring your significant other, friend, family member or crush for a delicious, chef-inspired pizza crafted from fresh, artisan ingredients.

For more information on Pie Five’s locations in Missouri, please visit the Pie Five location finder. Connect with Pie Five on Facebook, Instagram and Twitter. Join the Circle of Crust to earn points for every purchase of pizza or large salad. Circle of Crust members even get a free pizza on their half birthday!