One new restaurant and a conversion bring convenience to fast-casual pizza.

Pie Five, a 97-unit division of the Dallas-based Rave Restaurant Group, said the drive-thrus are opening in a newly constructed unit in Yukon, Okla., and a conversion of an existing end-cap restaurant in Indianapolis, Ind.

“Speed and convenience of getting a great pizza is a core part of the concept,” said

Clinton Coleman, Rave’s interim CEO, in an interview Tuesday. “We believe that drive thru could be a component to that when the right type of real estate is available. We want to make it easier for customers to access us in different ways.”

“This is a franchisee in the Oklahoma market that thought this would be a good fit,” Coleman said. “They were able to find a good piece of real estate.”

The Indianapolis location also opens this week in a retrofit of an end-cap restaurant.

“This is a real opportunity for us,” Coleman said. “Obviously, we want to test it in a couple of stores to learn everything we can before making a bigger initiative.”

He said Pie Fives speed of service allows it to work in the drive thru.

“We’re capable of a five-minute speed of service,” he said. “That is a little longer than you have in typical quick-service formats, but it’s still something that’s still entirely feasible.”

It also makes the pickup of online orders easier, he said. Online ordering has been launched in Pie Five’s corporate stores and can be delivered for curbside pickup, and that is being to rolled out to franchisees. Third-party delivery is being tested in some markets. 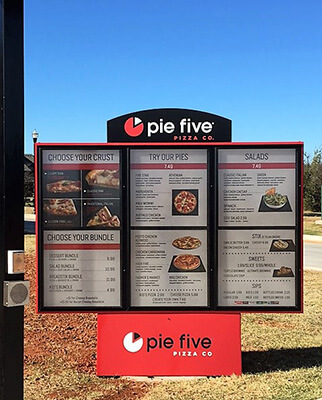 “This fits into our initiative to make it easier for customers to get the great pizza they want,” Coleman said. “These all do fit together.”

The drive thru at the Yukon restaurant will be open an hour after the typical 9 p.m. closing time. The Indianapolis store will maintain a 10 p.m. closing on both in-store and drive-thru dining.

Coleman said the Yukon location, being new construction, has a separate bake table, point-of-sale system and order window that’s dedicated to the drive thru. The converted Indianapolis restaurant has modified its ordering to accommodate the existing footprint, he added.

Rave Restaurant Group also owns and franchises the Pizza Inn buffet brand and has more than 300 restaurants. The Pie Five division has units in 23 states and the District of Columbia.